When The Winsted Phoenix interviewed NCCC President Michael Rooke on the second day of the semester, there was something on campus that had not been there for a full year: people.

As Rooke was talking on the porch outside of his office, students and faculty were all walking towards Founders Hall for their morning classes.

One of the people walking to the building for classes was Tracy Smith-Michnowicz, the new Assistant Professor of the college’s Early Childhood Education program. 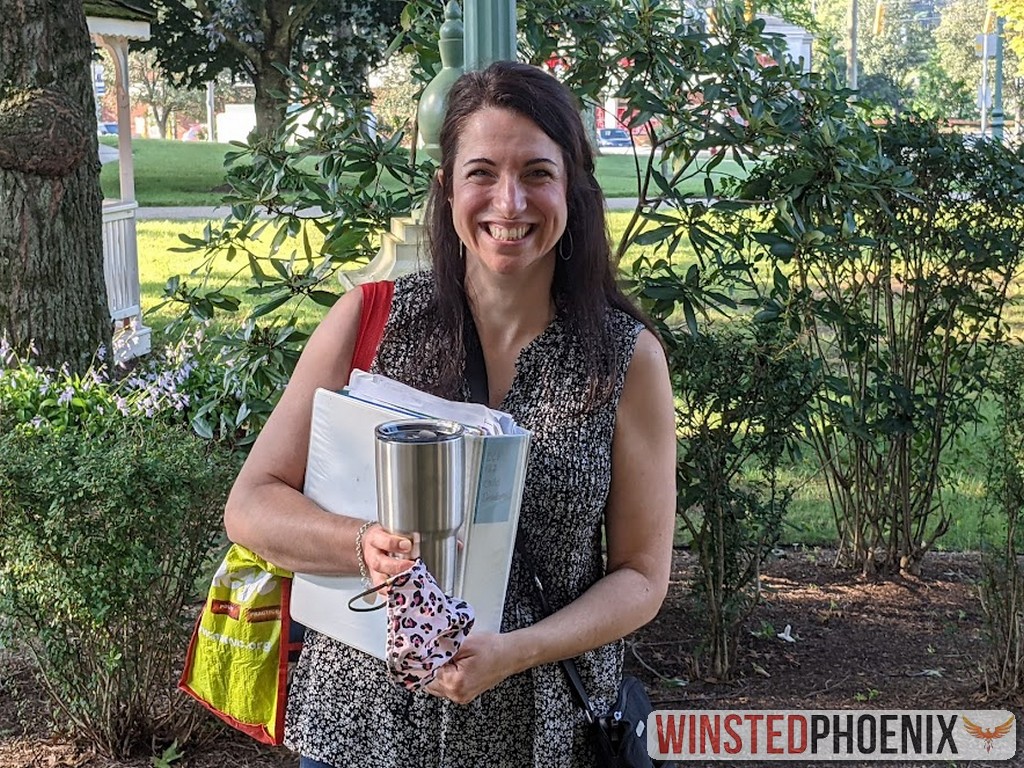 “Honestly, I think NCCC is a great community,” Smith-Michnowicz said. “It’s very welcoming and supportive, and I’m proud to be part of it.”

Rooke mirrored Smith-Michnowicz’s happy attitude about the beginning of the fall 2021 semester, which will be the first semester in a year where a majority of classes will be held at the campus.

“The other day I was driving down here for the first time in a year-and-a-half and I saw cars parked on Main Street,” Rooke said. “I was so excited to see that. I was like…wow! It’s starting to feel normal again.”

The NCCC community had to deal with plenty of challenges during the pandemic, including many of last year’s classes being taught online, with almost all of the campus buildings vacant for a full year.

Another challenge was holding the classes during the pandemic that were required to be taught in-person, including veterinary technician, nursing, and medical assistant classes, which could not be held virtually.

Despite these immense challenges, the personal-finance website WalletHub ranked NCCC as the best community college in the state for the sixth year in a row.

WalletHub also ranked NCCC as the 20th best community college in the country. See WalletHub article at this link.

“We are very proud,” Rooke, who is serving his sixth year as president of NCCC, said of the rankings. “To achieve this six years on is quite a thing. It’s exciting for me, especially in the times that we have gone through.”

Due to the rising rates of Covid cases in the country due to the Delta variant, those times have not ended yet.

However, NCCC has started this semester by offering both in-person and virtual classes for students.

“While we have some students who want to have face-to-face instruction, some of them don’t mind taking courses online,” Rooke said. “It saves them from traveling, plus it’s more convenient for them timewise. There’s a lot of pros and cons to virtual classes. What we are finding is that across the whole state, students are signing up for online classes in larger numbers than face-to-face classes. It used to be 10 to 20 percent of our classes were online in the past. Now it’s more like 50 percent in-person, and 50 percent online going forward.”

As for in-person classes, Rooke said that safety is his number one concern.

“We are just developing a survey of our employees and students to find out who is vaccinated and who isn’t,” Rooke said. “We don’t know yet who has been vaccinated and that’s why we are requiring everyone to wear a mask when they are on campus. You must keep your students and employees safe, and the only way to do that is through social distancing and masks.”

Rooke said that anyone who has chosen not to be vaccinated will be required to be tested each week for Covid.

“The Centers for Disease Control says that, once you have a 75 to 80 percent vaccinated population, you can dispense with the use of masks and social distancing rules will go away,” Rooke said. “I do think we will reach that threshold for this community. Part of our educational mission is to educate people in the community and the students why it’s important to get vaccinated.”

Rooke added that NCCC was lucky last year when it came to the pandemic, with up to four individuals in the NCCC who tested positive but were never on campus.

As for this year’s student population, Rooke said that the college currently has 1,200 students enrolled.

He said that enrollment remains strong despite the pandemic and due to the state’s Pledge to Advance Connecticut (PACT) program, which fully pays tuition for full-time student enrollment.

“We see a significant increase in full-time students enrolled at NCCC and a decrease in part-time student enrollment because they shifted to full-time,” Rooke said. “The PACT program is working well across the state, with some colleges promoting it more than others. We took a bit of a risk last year because we didn’t know until June whether or not it would be funded by the legislature. So last year, they didn’t fund it. College systems had to pick up the tab.”

Rooke said that both NCCC and the state’s college system will be on his mind this year, as he’s serving as both the President of NCCC and the Interim Provost for the State’s Colleges and Universities.

He is part of the process to consolidate all 12 state community colleges governed by the Board of Regents, a process that started in 2018.

“We have been working with our accreditor, which has been a critical part of this process,” he said. “We will submit our plan in January 2022. We should hear back from our accreditor by March 2022 whether or not the plan has been approved or not. If approved, the merger process will be gradual. But it will formally begin on July 1, 2023. I may be wearing two hats, and I’m not involved with NCCC as much as I used to be, but I am still here and enjoying everything at the college, moving everything forward.”